So close, but no individual medal... 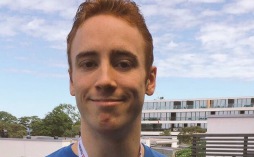 There was to be no fairytale ending for Alex Buesnel on the final day of competition at the 2017 Gotland Island Games.

After qualifying for the final of the FIG Individual Floor, Alex came agonisingly close to a bronze medal, but had to make do with a hugely creditable 4th.

His score of 11.400 was just 1.100 behind third place. A terrific achievement when you consider there were 23 other gymnasts that started this discipline.

And his work was not yet finished, as he was called in as a late replacement to the High Bar final, after an injury to teammate Cameron Aird.

Despite this being a weaker event for him, Alex managed 6th place out of 8, and improved his score from Wednesday's semi-final!

From Alex, a tweet thanking all the local media for their coverage during the week..... 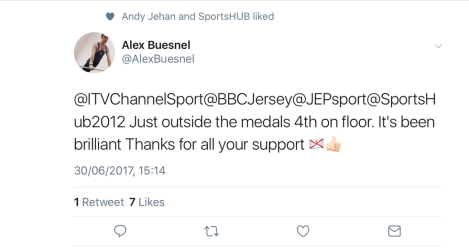 Alex also told us: "It's been a great week. Thank you for covering my story. I enjoyed every moment and hope others may follow my footsteps."

The final word comes from proud mum Sharon. She told us: "He can be proud of his individual performance in the final."

She also told us what we probably already knew. "The whole week has seen good competition, and it's one I'm sure Alex won't forget in a hurry."

To read all about an extraordinary week in the life of the first Special Gymnast to appear at the Island Games, go to the bottom of the page and work upwards.

Final place for Alex after Day 2

After his exploits on Day One of the gymnastics competition on Monday (see the bottom of this page), Alex Buesnel suprisingly won through to the finals day at the 2017 Island Games in Gotland.

After competing in the Men's FIG Individual Floor, Vault, High Bar, Parallel Bars, Rings and Pommel on day 2 of the gymnastics competition, Alex finished in 11th position overall, and has reached Friday's final in the floor!

Before the start of the second day of gymnastic competition, Alex was not too confident about his own performance........

In the meantime, Alex has been talking to BBC Radio Jersey about his medal-winning efforts, and about himself as well. It's a really good listen, and you can hear it right here on the BBC iPlayer Radio - just fast forward to 1 hour, 36 minutes and 30 seconds. (Only available until 26th July).

Team silver for Alex on his debut! 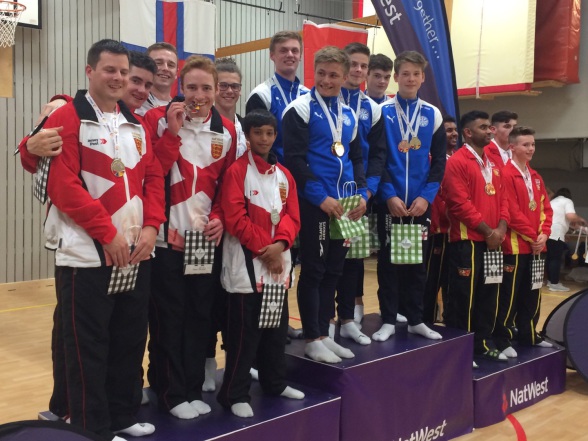 Team Jersey men on the left, with Alex proudly holding up his medal!

On his very first day of Island Games action, he helped the Jersey Men's team to a silver medal in the Team Team Floor and Vault in Gotland.

This means he is the first Jersey Special Gymnast to win a medal at an Island Games.

The inspirational athlete told us: "I am so proud that I could help Jersey get a silver. Although no individual medals for me this time, it was an amazing experience. I'm so happy!"

Below you can see all Alex's performances on the first day of gymnastics competition at the 2017 Gotland Island Games. 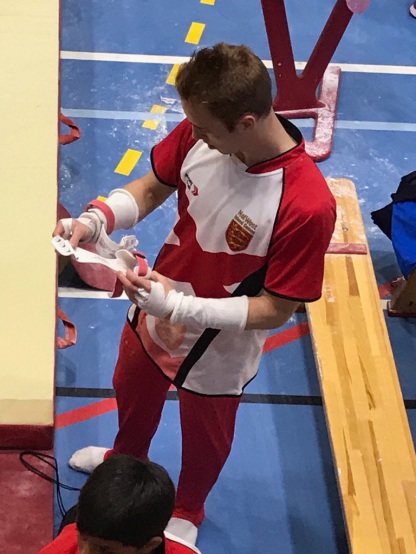 Alex preparing for Day 1 of competition

Alex Buesnel became the first Special Gymnast to be selected for an Island Games, when his name was included in Jersey's gymnastics squad for the 2017 Games on the Swedish island of Gotland.

So go Alex, you've made history, go and make some more! And all of us at the JSAD wish you the very best for this week. 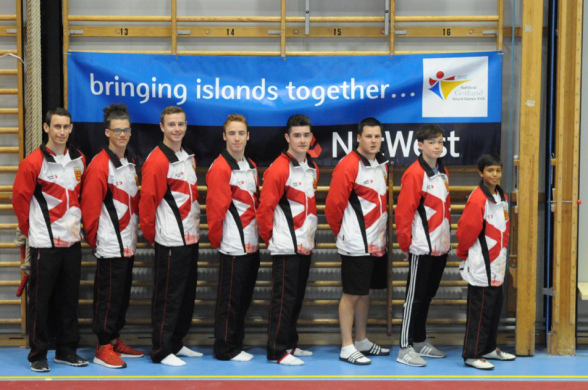