All the results and fixtures can be seen below.

RBC Maples (left) after their title winning performance, with Jersey Wheelers on the right

The 2016 Challenge saw RBC Maples retain their title. They beat Jersey Wheelers 28-18 in the final, with Laszlo Maros (RBS) top scoring with 12 points.

We had a new team for the 2016 season, with the youth team Rookies bringing the numbers up to six. Rookies were formed by some young lads who attended last year's outreach programme.

RBC Maples clinched the 2015 title for the second time, after beating last year's champions Jersey Wheelers at Fort Regent. Though it was certainly a tight and hard-fought encounter, Maples were never behind, and fully deserved their triumph.

It was even for most of the first quarter, with Maples just edging it 6-4. They extended that lead, but only by a single point, to lead 12-9 at half-time.

By the end of the third, it was 22-17, until better accuracy with their shots in the final quarter saw Maples move away and eventually win by nine points.

Natalie Walker (Wheelers) top scored in this final, with Maples' Pete Ingram just one behind.

After the match, the Stonehage Fleming Fair Play Award for the season went to the losing finalists Jersey Wheelers, with an astonishing statistic of just 6 fouls all season.

It would have been difficult to emulate last year's astonishing final, and Jersey Wheelers showed their improvement over the past year with a relatively comfortable win in front of a large crowd at Fort Regent. 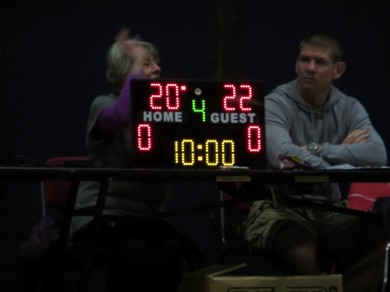 In the greatest and most exciting match ever seen in Jersey, JBBA All Stars grabbed the winning golden basket, after the match was level at 20-20 following the fourth quarter.

The Wheelchair Basketball Challenge 2013 final was played as part of the annual JSAD Disability games as has become tradition, and a huge crowd at Fort Regent noisily supported both teams during a match that went from end to end throughout. Wheelers' coach Guy Gilson, despite being on the losing side, said the final was "one of the greatest sporting moments I have ever witnessed."

For the All Stars Chris Byrne scored seven baskets. Francis Rocha, Steve Burnett, Lauren Sydall and Emma White all scored one basket each.