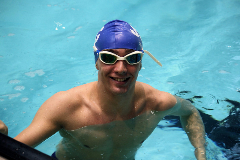 He has set a number of personal bests in all his S14 swimming events this year, and is very much in the eye of the Great Britain team selectors for the Rio Paralympics, having currently placed fourth in national trials.

Sol  holds currently holds 20 all-time best South East Regional records, and is ranked Number One swimmer in the South-East in his category. 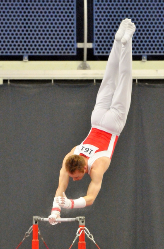 Two other well-known JSAD members were also nominated for top awards even though this time they were not successful.

Alex Buesnel was put up for the JSC's 2016 Sportsperson of the Year title.

The former World and European champion is surely one of the finest sportmen Jersey has produced this century. He has dominated the British Disability Gymnastics Championships for almost a decade.

Last year he defended his National title for the eighth consecutive time, and shows no sign of giving up his top-ranking spot this year.

Away from the sport itself, JSAD chairman Paul Patterson says: "Alex is an accomplished ambassador for Jersey, and is a great role model for his fellow gymnasts to follow at the Jersey Special Gym Club."

Paul Deffains was nominated for the Colin Welsh Memorial Trophy, for outstanding commintment to a sport.

Paul has been a member of the General Committee of JSAD for more than 15 years and initially joined while he was still at school in order to help behind the scenes when Jersey hosted the Islands Sports School Federation Games.

Following the very successful hosting of the ISSF Games in 1998 Paul went on to become a very key behind the scenes volunteer for the activities of JSAD, particularly in the learning disabilities division of the Association.  To this day Paul spends every Thursday evening assisting members with sports related activities at a well-established Club.

Paul is also a key player for JSAD when the club stage larger events, such as the annual participation in the Jersey Marathon.  He is also the annual Disability Games Manager.

"It is important to note that Paul joined JSAD when he was a very young man," says Paul Petterson, "and while he is not an old fellow now (36) he has remained a true supporter of disability sport, dedicating many hours of his time assisting others reach their sporting potential."

He added: "At a time when many sporting organisations are struggling to attract younger volunteers we believe it is important to recognise someone like Paul Deffains."