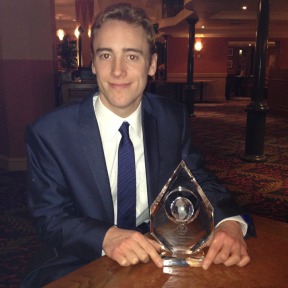 JSAD have jealously guarded the Special Merit Award, only issuing this on nine separate occasions, to eight different athletes.

Alex Buesnel, who has already received a JSAD Special Merit Award for high achievement, has continued to perform at the highest level.

In the past year, Alex has successfully defended his British title for the ninth consecutive year, has won gold medals in the British Masters, and British Gymnastics have selected him as one of their Disability Gymnastics Ambassadors.

JSAD are firmly of the view that Alex Buesnel is one of the finest gymnasts Jersey has ever produced and wish Alex every success with his future gymnastic career.

The trophy was presented to Alex at the Merton Hotel on Saturday 19 November by Paul Patterson, Chairman, JSAD.

He has been a student of wheelchair martial arts for over ten years and in spite of being a quadriplegic wheelchair user, Tyrone achieved a dream two years ago by reaching the grade of first dan in aikido!

This achievement was considered to be all the more impressive because the independent assessors who graded Tyrone had no knowledge of anyone else with Tyrone’s disability in the world having achieved this high standard.

Ty has continued his studies and training and has recently been awarded with his second dan in aikido.

There is no doubt in the minds of The JSAD that this is a world class performance and the awarding of a Special Merit Award to Ty is our recognition of his tremendous achievement.

The JSAD also wish to acknowledge the efforts of Ty’s coach and mentor Roisin Pitman.

The trophy was presented to Tyrone by Paul Patterson, Chairman of the JSAD.