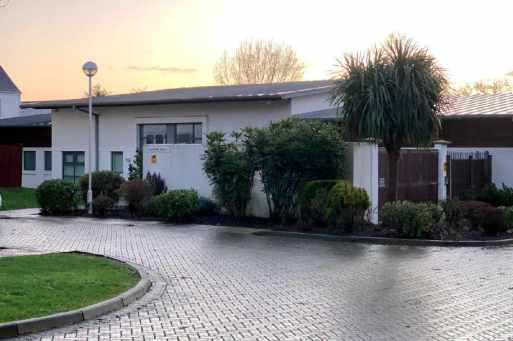 The future has been looking extremely bleak for the club that has been operational for three decades, and one that has produced four World Champions, eleven National Champions, and has accumulated hundreds of gold medals right around the world.

They simply have no home, despite promises from the Government of Jersey.

The Jersey Special Gym Club has always provided opportunities for children with special needs to participate in gymnastics. It has also always punched well above its weight with masses of success at regional, national and international levels.  The club is recognised by Special Olympics Great Britain as a Centre of Excellence and its club coaches are regarded as some of the best in Britain.

So, what has gone wrong? Why is there talk of this incredibly thriving club maybe folding in the very near future?

We need to look back at the history of the club which started its days operating from a school gym. As it continued to flourish, it became necessary for the gymnasts to move.  After finding temporary facilities, the Government of Jersey placed them at the Greenfields facility; this was always supposed to be a temporary home as well. The Government of the day pledged to find the Special Gym Club a permanent home, but in spite of numerous attempts to progress this pledge, so far it has failed to do so.

But according to the Jersey Sports Association for the Disabled chairman, Paul Patterson MBE, there may be just be some better news around the corner. Following what he describes as a "positive" call with Jersey's Minister of Sport, Lucy Stephenson, it appears that there is plenty of action happening behind the scenes at government level.

"There is, at this moment confidential, a plan to find a short term home for the Special Gym Club," he said, "and I like what I am hearing. I thank the MInister for her ongoing help."

So while there are no concrete plans finalised, it does seem the Government is responding to the dilemma afflicting a club that changes so many lives for the better, and improves the health and well-being of so many vulnerable children with special needs.

Any further developments will be reported here as soon as the details become available.

Medals for Alex, Chloe and Jessica in first post-Covid competition

It’s well done to Alex Wheatley, Chloe Russell and Jessica Viera, who all came away with well-earned medals from the Special Olympics Waveney Open Summer Series of Sport.

This was their first competition since Covid so all involved were nervous and excited to compete and catch up with all their friends.

The nerves and the heat in the gym got the better of all the girls at first but they went on to produce good routines and results. All three gymnasts medalled in each piece of apparatus.

The highlights were the gold medals won by Alex Wheatley & Chloe Russell on Floor & A-Bars respectively. Both girls were competing at Level 2.

Jessica Vieira, competing at Level 3, gained a Silver and 3 Bronze on her pieces.

Their subsequent return home was hampered by two flight cancellations by Easy Jet on the Sunday evening and the first flight on the Tuesday morning and the gymnasts and their coaches eventually arriving 48 hours late back in Jersey.

Head Coach Nicola Kirkland was delighted with the performances. “We are proud of how the girls performed, having had to learn new routines during Covid, and training in the knowledge of the imminent loss of their gym, and also for the way that they conducted themselves during the delays.”

Nicola went on to pay aanother tribute: “A special thank you must go to Tori from De Mond Gymnastics Club who let us use their facilities for the girls to train the week before the competition, following the eviction from our home of 14 years at Greenfields.”

Despite this successful trip, the Jersey Special Gymnastics Club are still looking for that new home to keep their club going, and would appreciate hearing from anyone who may have a building suitable to use.

See the original story below for more details, and scroll upwards for all the latest news in the search for a new home.

After all the trials and tribulations of the Covid-filled past two years, another sinister situation is currently being faced by the Jersey Special Gymnastics Club.

The Club have been told they must vacate their premises at Greenfields and remove all their substantial equipment from the site.

This is at a time when the club have a team participating in UK for a competition in early July, which is a qualifier for the next World Games in Berlin next year. If one or more of the gymnasts are selected for a GB team slot it will, of course, add pressure to ensure the club have some access to a gym and equipment for training.  There are only three places available on the GB Team so competition will be strong.

According to the JSAD, this is a particular body-blow as there is no political leadership anywhere in the run up to the general election next month. The JSAD also say that: ”This club has produced some of the finest athletes Jersey has seen, at world level, so this situation is totally unacceptable.”

The States of Jersey’s Children, Education and Skills department have sent a “notice to vacate the sports hall” at Greenfields Secure Children’s home, citing that “due to the nature of risk associated with residents at Greenfields, we are unable to establish dual purpose.”

The chair of the Jersey Special Gymnastics Club, Jeannine Carey, gave us her reaction to the news. “The coaching team and committee were disappointed and shocked to hear, via Channel 103 initially on the 6th April, that we were required to be out of our premises by the 5th July,” she said. “The timing is not good for the club when we have gymnasts competing in the UK on the 9th and 10th July so they need to train on equipment up to the event.”
Jeannine also explained the kind of premises that are needed. “We ideally require a property at least 6 metres high with a minimum of 30 metres in length and 16 metres wide. We will also require toilets, including a disabled toilet, a small store room for supplementary equipment, parking & access for safe drop offs.”
She also added that in order to store all its equipment, whilst finding a new home, the club require a store of at least 4 metres in height, and a floor space of 12 metres by 10 metres.
Looking at a worst-case scenario, what happens if no new or temporary premises can be found? Jeannine is quite clear on this. “It would be absolutely soul destroying if no premises could be found temporarily and the thought that the club would cease to continue is not something that we are willing to consider at the moment.”
Jeannine also gave an historical context to the problem. “The Special Gymnastics Club was founded in 1991 by John Grady and has produced several World Champions,” she said. “We hope that it will do so in the future. We would not wish to see all the work he did undone. The longer we are without premises the harder it will be to maintain the levels our gymnasts are currently working at, and also grow or maintain the current level of participation.”
She finished off by telling us how important the sport is for all the participants. “Gymnastics is a good sport for teaching discipline, independence and a strong work ethos, and has helped many of our young special needs gymnasts thrive and go on to better things as a result.”
If you, or anybody you know can help, please contact chair Jeannine Carey or head coach Nikki Kirkland at jsyspecialgym@hotmail.com or contact the JSAD either by mail: thejsad7@gmail.com or by phone: +44 1534 872855. 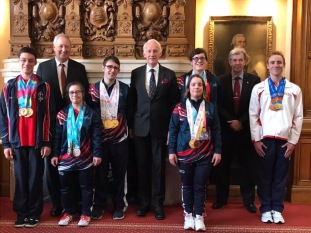 Four members of the Jersey Special Gym Club that performed so well at the 2019 Special Olympics World Games in Abu Dhabi this year were invited to meet the Bailiff, with their family and friends, in recognition of their achievements representing Great Britain.

They all chatted to the Bailiff and some States members about their experiences, and to show them their medals.

Deputy Kevin Pamplin said on Twitter: "Great to catch up and celebrate the success of our brilliant medal-winning ambassadors. A wonderful reminder of what hard work, teamwork, and aiming for your dreams can bring."

Take a look at some images from the final gym competition of the year. 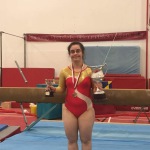 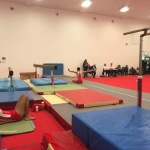 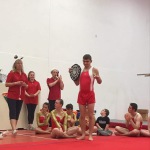 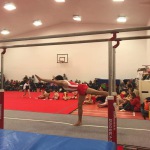 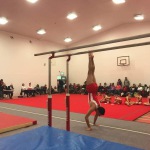 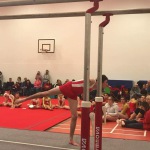 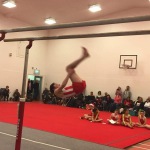 Four Jersey special gymnasts came home from the Echo Arena in Liverpool after earning 12 medals, at the British Disability Masters.

Alex Buesnel won four golds, including taking top position in the All-Round section. There were also medals for James Lang and  Matthew Kirkland, with Aaron Bonner just missing out on bronze in the High Bar. 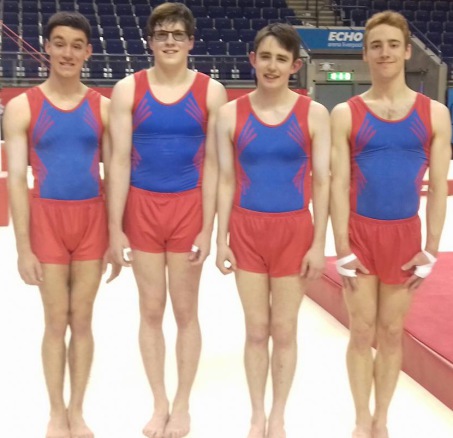 MAG DISABILITY MASTERS 2018 - ALL ROUND

Medals for entire squad in Poole! 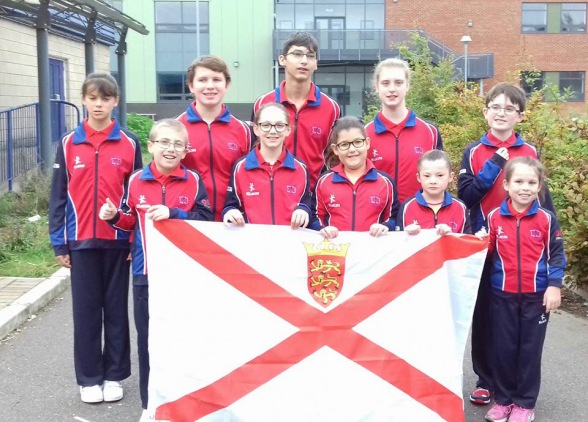 10 members of the Jersey Special Gymnastics Club competed in the Poole Open Artistic Gymnastics Competition at Rossmore Leisure Centre, and all ten came back with medals.

Chloe, the senior member of the squad, travelled to compete for the first time after an 18-month break for surgery on both knees. She had an outstanding competition, coming home with three medals.

For two of the gymnasts, Marc and Monique, it was their first tournament outside Jersey and they both had a great competition and experience. 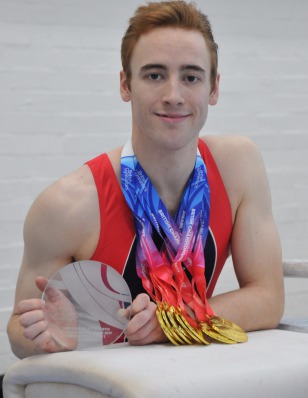 Alex Buesnel with his trophy

His four team mates at the event also did the club proud. Matthew Kirkland and Aaron Bonnar made it a 1-2-3 with Alex in the Men’s Open, Cailiegh Quail was second overall in the Women’s Senior, while at the ripe old age of 42, Rui Reis won overall Gold in the Senior Men’s B Competition. 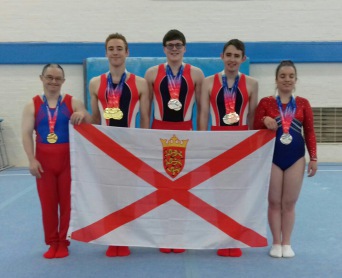 The squad of five at Lilleshall

In the Men’s Open, Alex secured Gold medals on all the apparatus, (vault, pommel, rings, floor, high bar and parallel bars) to take the overall title for the tenth consecutive time.

Alex’s dad Gary did not hide his pride, saying: “To win one national title is fantastic, to win ten back to back is nothing short of phenomenal!” 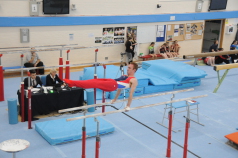 Alex on his way to his 10th title

That is something that has never been achieved before, and surely means that Alex is the greatest disability men's gymnast that Great Britain has ever produced.

Head coach Yana Vibert thought that those second and third positions were well deserved. “Both boys have worked really hard this year with both putting many more new skills into their routines.”

Rui Reis competed in the Senior Men's Competition B and amassed a really impressive five Golds and two Silvers. At 42 years old, Rui was competing against men half his age but he showed his dominance winning overall Gold.