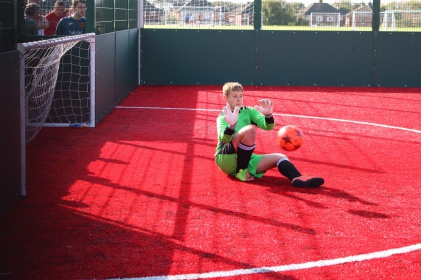 Lewis Nowell makes a save for Jersey C

In the morning a number of assessment games were played to ensure that teams played in the correct ability level league in the afternoon and it soon became apparent that many teams had taken strong squads to this inaugural event. The three Jersey teams had mixed results against these more experienced teams but grew in confidence with each game.

In the afternoon the teams were separated into four leagues with four teams in each and a round robin event took place, with games of 10 minutes each.

Jersey A somehow lost their first match despite having the majority of play. It was only the excellent saves of the Fleetwood A team goalkeeper that denied them scoring on several occasions.

The team then dominated their second game by playing some good passing football. They continued their scoring ways in their final game and scored two early goals. Bolton pulled a goal back as tiredness began to show in the legs of the Jersey players after the long day of football and Bolton created several further scoring opportunities.

Jersey scored a third from a quick counter attack but this was cancelled out shortly afterwards and Jersey goalkeeper, Scott Graham, was kept very busy until the final whistle. With two wins and one loss, Jersey A ended the tournament second in their league.

Following their success in the morning’s assessment games, Jersey B were placed in a league with three very strong teams.

Due to one of their team picking up a bad injury, the remaining five players were committed to playing every minute of every game. As you can see all the games were high scoring, with Jersey B just ending up on the losing side in all three games.

Jersey C team lost their first match in league four against a strong Denby C, but their second was an exciting end-to-end encounter with both teams evenly matched. Having both scored, it looked as if the game would end in a score draw but in the last minute, captain Olly Wellum beat his marker and accurately crossed the ball to Simon Routier, who finished off the move with a confident half volley to win 2-1.

Their final game was another close match against Newcastle C, but despite goals from Chris Green and Ryan Jones, they lost by the odd goal in five.

The Jersey coaches were pleased with the overall performances and felt that much had been learnt by their players from the challenge of playing against teams of high ability.

Best player awards were given to Lewis Nowell (on his first trip with the squad) for his outstanding performances in goal for the C team; to Fabio Cerviera, who worked tirelessly and scored many of the B team goals; and to Shane Crocker for his overall contribution in the A team.

A special award was also made to Paddy O’Connor who, after over 16 years of playing for the squad, has decided to hang up his boots.

The squad trains every Tuesday evening at Les Ormes between 5.45 and 7.15 and anyone interested in taking part should contact Gary Norman on 879033.

The second weekend in July 2017 saw the LD football squad host a friendly tournament against a mixed squad from Lambeth College, South London. 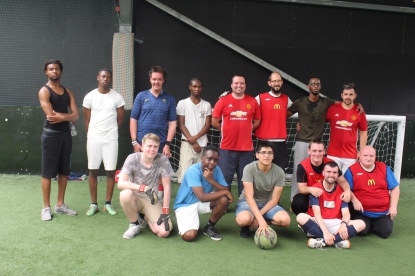 Jersey and Lambert College A teams

Lambert selected their best seven players to take on the Jersey A team in two 5 a-side games lasting 30 minutes each. Both squads divided their remaining players into two teams who played a round-robin event with the emphasis on ‘fun’, as many of the Lambert female players had no previous experience of playing football.

Right from the start of the first game, it was apparent that both teams were well matched and it took 10 minutes before the deadlock was broken with Lambert scoring the first goal. This was immediately cancelled out by a strike from Jersey’s Paddy Taylor. The hosts then unfortunately gave away a penalty at the start of the second half from which Lambert took the lead again. Both teams then created several chances until, in the closing minutes, a deflection beat golie Scott Graham to ensure victory for Lambert.

The second game was much more open with players stamina depleting in the very hot conditions of Les Ormes indoor pitch. This time, Jersey stormed into a 3-0 advantage, only for the visitors to fight back strongly to take a 4-3 lead. Jersey wasted a couple of chances before Alex Hilton leveled the scores, but Lambert scored a fifth just a minute later. The final few minutes were strongly contested and just before the final whistle, Malcolm Motie threaded a ball through to Jordan Gautier who equalized to end a thrilling encounter.

That final game saw the two unbeaten Jersey teams play each other, with Jersey B dominating the early part of the game. Their chances though were thwarted by a strong defence and some superb saves by Lewis Nowell. Eventually the deadlock was broken by an astute pass from Chris Green to Warwick Miller, who took the ball the length of the pitch before rifling in a shot into the Jersey B goal. Just before the end of the game Josh Wellum scored a second for Jersey C who thus finished top of the league.

The two groups later played bowls where friendships were cemented and everyone agreed the day had been a great success with Lambert hoping to return to the Island next year. 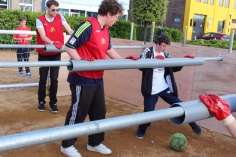 Recently, many players from the Jersey Learning Disability squad took part in the opening games of 'Human table football' to raise money for Autism Jersey. 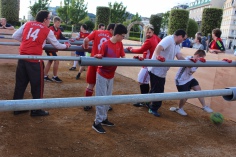 The life-sized table football pitch, which had been constructed by two local building firms, was a rectangular box with wooden boards, goals at each end and poles running from one side to the other. 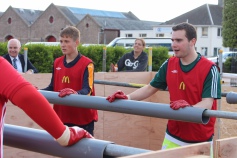 Each pole had one or more pairs of gloves super-glued to it, and the six players per team had to thread their hands into the gloves so that they were attached to the pole. 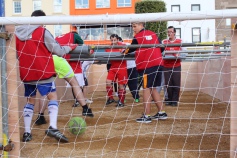 With hands attached to the poles it was impossible to move forward or backwards. But the players soon learnt to shuffle left and right, in an effort to kick or block the ball.

Everyone had a lot of fun and later a human table football league contest was staged, with both events helping to raise £4,300 for Autism Jersey.

Silver medals for both A and B teams at Harrogate

Both Jersey Learning Disability ‘A’ and ‘B’ football teams finished second in their respective groups at the prestigious Harrogate 5 a-side tournament, which this year saw over eighty teams take part from all over the UK.

Alex Hilton (A team) and Ian Le Maistre (B) received best player awards, while Chris Green (B) was awarded the Jersey Sportsman of the Tournament for his overall contribution and endeavor/sportsmanship.

Here are all the details and reaction to a brilliant set of performances.

A nervous start for Jersey A saw their opponents taking an early lead. Despite creating a number of chances, they were unable to score.

Jersey lifted themselves in this second game, and played some good football that eventually saw Shane Carr set up Seb Leonard who scored the only goal with an accurate long shot.

The team continued to play well and dominated the third game which saw Alex Hilton score a hat-trick and Fabio Cerviera add another.

The heavens opened just before this match against an unbeaten Walton Sports team. Despite the sudden difficult conditions, both teams played entertaining end-to-end football, but neither could break the deadlock.

Jersey played some of their best football in the last game, passing the ball well and making space to create chances, three of which they took without reply.

The B team started their afternoon group games with a convincing win, in which Ryan Le Monnier scored a hat-trick and Warwick Miller and Sam Cross also added goals.

The second game was against a well organized team, and with both teams' goalkeepers making good saves, the games ended goalless.

The third game was against a physically larger team of SO Skelly-land and early pressure from the opposition was kept at bay by stout defending from Paddy O'Connor, and from Ian Le Maistre in goal. Although Jersey did create some chances with both Ryan Jones and Simon Routier hitting the woodwork, it was SO Skelly-lands who scored the only goal with an unstoppable shot in the last minute.

Jersey B 4 – 0 Pontefract
Jersey were back to winning ways in their final game which they controlled from the kickoff. Sam Cross and Ryan Le Monnier linked up well and Pontefract could not cope with their one-two football and Ryan's accurate shots. Ryan ended up scoring all four goals as Jersey B finished on a real high.

Head team coach, Gary Norman, said that he was very pleased with the way that both teams played throughout the day.

“The A team responded well after losing their first game and the B team were a credit for their spirit and teamwork.”

He also praised the defense of both teams, saying: “They both kept four clean sheets and only conceded one goal each.”

Check out some of the action in our gallery below, and you can find more in our Photo Library section - just click on the link above on the left.