In one of the most comprehensive articles yet about JSAD personalities, our own Director of Disability Martial Arts, Roisin Pitman, features in Jersey Sport's "Inspiring Stories" section of their website.

If you don't know the full story surrounding Roisin's remarkable life, you will after reading this! Just click here to find out. 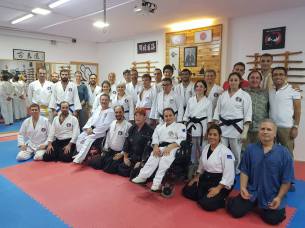 The group after an aikido session

Roisin, the JSAD Director of Disability Martial Arts, has just returned from her second trip to the Turkish city of Izmir, to teach a series of Aikido seminars to students, which included a team of disabled athletes.

This was Roisin’s second visit, following the first in 2016, when she accompanied Japanese
Master, Soke Yasuhisa Shioda, to the Accessible Izmir trade fair which included public aikido demonstrations and classes for differently abled students. 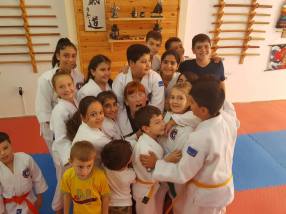 This recent trip was a personal venture to introduce to the Japanese Arts and Sports Club Association for the Disabled, from the Kersiyaka district, Roisin’s Mukyokan style (Without Boundaries) of Aikido.

She was also able to teach a seminar on self defence including a children’s class during this seven day trip. 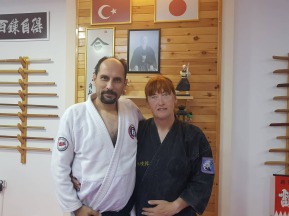 Sensei Engin Ergin, Head of the Izmir organisation, was once again a gracious host whilst Roisin was teaching many different disabilities, which included wheelchair users, amputees and students with learning difficulties.

Roisin, who is partially sighted, was also invited to address the medical faculty of Ege University in Bornova, on the subject of remaining fit and healthy over the age of fifty, which
she did with the aid of her interpreter Kemal.

The talk finished with an impromptu self defence class with many of the people who had been in the auditorium to hear her address. 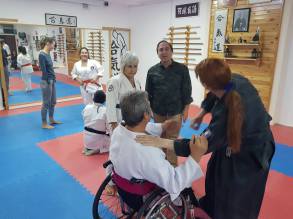 During the visit, Roisin was able to spend time off the mat with new and old friends alike and discovered that there were cafes in the city, similar to Jersey’s own Beresford Street Kitchen, where people with disabilities were trained and supported in the workplace.

Izmir will now become a regular link in Roisin’s Mukyokan venture and it is hoped that members of the Turkish club will be able to visit Jersey in the future to take part in the JSAD awareness events.

Highest grade in the world for Roisin Pitman 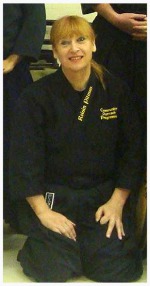 "The praise should also be directed at my students"

Jersey martial artist Roisin Pitman has been promoted to what is believed to be the highest grade currently held by a traditional aikido exponent with a disability in the world.

Roisin, who has studied martial arts since 1980 and has taught since 1987, has just been awarded 6th Dan in Traditional Aikido by Master Yasuhisa Shioda of the Shioda International Aikido Federation in Japan.

This accolade comes despite Roisin suffering from a debilitating condition Stickler's Syndrome, that renders her partially sighted with chronic arthritis.

And she is adament that this huge honour is not down to her alone. "It was a great honour to be recognised by such an illustrious teacher as Shioda Sensei," she said. "However, the praise should also be directed at my students who have made me who I am today."

"Shioda saw something in me that he liked and I am extremely humbled that thirty-five years study of aikido has been marked in this way. It shows that despite having a disability, you can achieve anything that you set your mind to."

Ever since Roisin lost her sight in 1990 she has strived to maintain a level of fitness, both mentally and physically, to help fight the incurable condition that blights her life and the main 'life saver' has been the study and dissemination of aikido to students in her own school in Jersey as well as clubs throughout Europe.

As the Director of Disability Martial Arts in the JSAD, Roisin has opened her doors to anyone who is able bodied or disabled, to enjoy the uplifting and empowering feelings one enjoys practising traditional aikido.

In 2006 Roisin welcomed to the school her first disabled student, Tyrone Nicholson, a wheelchair user with cerebral palsy, and for whom aikido has become a way of life. In 2011 he became the first quadriplegic aikido black belt in Europe, having successfully passed his examination under independent overseas assessors.

In recognition of her achievements, Roisin received a rare "Special Merit Award" at the 2015 JSAD Awards night, and a year later in the 2016 event, she was voted Coach of the Year.