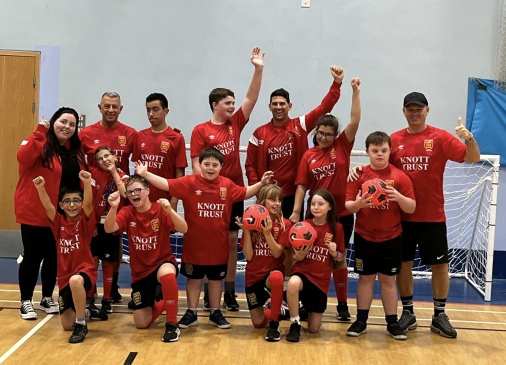 Mark Ray, head coach, is delighted with the support from these sponsors as it has enabled him to purchase some kit for all the junior squad and coaches, together with tracksuits and small kit bags.

He told us: “The kids look amazing and when he we handed out the kit, they wanted to put them on straight away. Some parents have told me that they find it hard to get the kit off them after training sessions as they love it that much and want to wear it all day!”

With the funding from the JFA, Mark is going to purchase some new balls, bibs, pop up goals and a ball that is designed to help blind/partially blind people as it has a bell integrated into it. This will benefit one of the kids who attends the sessions and has difficulty with sight.

The J.F.A.'s David Kennedy said: “We have been delighted to provide support for the new session as ‘increasing the opportunities for people with a disability’ was an area we identified as a priority when writing our strategy last year. Mark and his helper coaches have been outstanding in setting this up and do an amazing job each week for the youngsters.” 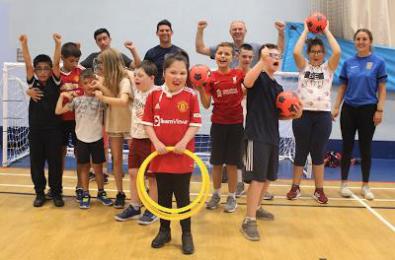 Gary Norman recently went to find out how the new section of LD football, for juniors, was progressing. Here is his enthusiastic report!

The first thing I heard as I approached the gym at Oakfield was excited voices and lots of laughter. Opening the gym door, I saw many footballs being kicked about by the kids whilst Mark Ray, assisted by some family and friends, set up the goals and put out cones. Mark’s daughter Mollie greeted me enthusiastically and asked if I was there to play football too. It all brought a huge smile to my face.

The junior learning disabilities football has now been running for over 4 months. Each Saturday morning at 9.30, around 14 players between the ages of 8 and 14, enthusiastically turn up at the gym for the hour long training sessions. 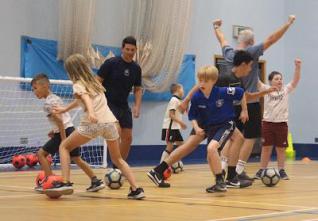 Mark told me that the football sessions were set up to allow kids with disabilities the opportunity to play a sport that he loved playing, and that they might not have had exposure to before.

His idea was to create an environment that allowed them to enjoy themselves without restrictions, but under a structured way, learning the basics about football such as passing, dribbling and shooting.

Each session is structured the same so that the players know how it starts, where they are to go and are familiar with what to do. The first part has the group doing basic drills and exercises, together with fun games like shooting at cones and dribbling races. Other coaches provide one to one coaching to any player that falls out of this part of the session, and this allows the youngsters freedom to drift in and out if they need to.

A game of football is played to round off the session and Mark has noticed that the kids are really developing their basic football skills and also their coordination and confidence. Despite the game being frenetic, the coaches ensure everyone is involved and get a chance to try and score a goal. 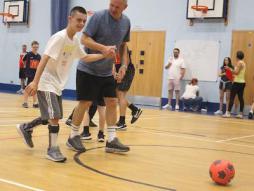 Parents sit at the side of the gym, providing encouragement and support to all the players, and Ethan’s father told me that his son looks forward to each Saturday because he has a chance to wear his Arsenal kit and he added that Ethan had really come out of his shell and grown in confidence since joining.

Another parent said that his son loves to play football and always has energy to burn but until Mark set up these sessions there was no suitable football groups available.

India’s mother explained that she only plays for a short while but loves helping with the equipment, especially the hoops, and is now the self-appointed cheerleader.

Jack loves the ‘fun’ environment and he takes part in disabled cycling after the football which is not ideal given his condition, but he enjoys both so much that he insists on going despite both activities tiring him out for the rest of the weekend!

Mark is assisted by other qualified coaches including Island manager Martin Cassidy who says that he enjoys being involved in the sessions and seeing the kids happy playing in a safe environment where they have freedom to develop at their own pace.

Overall, the sessions are fantastic fun in a friendly environment where kids make new friends, burn off energy and improve their skills. It is heartwarming to see the enjoyment on everyone’s  faces throughout the session.

Mark is hopeful that the numbers taking part grows, and if you are interested in obtaining further details about these sessions, you can contact him on: