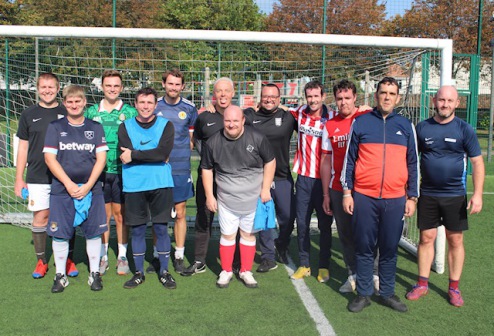 The LD football and MIND squads at Springfield

MIND, in conjunction with the Jersey Football Association, arranged an open day at Springfield football stadium to promote the benefits that football can provide for the well-being of Islanders. A few of the LD football players have benefited from MIND’S weekly football sessions and a number of the squad took part in a one hour session of six-a-side.

The two teams were a mix of players from both MIND and LD football and a fast- paced game was played in good spirit. The score was very close and everyone agreed that the result was irrelevant as they had thoroughly enjoyed the runout!

MIND provide other physical activities and their staff were available to meet and greet, and discuss how people can be involved with their other initiatives in sport.

More action from the same match......

Shane and Seb qualify as referees

Shane Crocker and Seb Leonard have both completed the FA referee course at Jersey’s Springfield stadium to qualify as referees.

The course started several months ago with monthly Zoom calls hosted by the JFA’s Brian Oliver, and covered many aspects including the laws of the game, terminology, welfare of players and dealing with spectators. There was also a requirement to successfully complete a number of online assessments.

The final part of the course saw the pair attend three sessions at Springfield Stadium over one weekend which was also attended by retired professional referee Trevor Massey. His presence benefitted the group with his extensive knowledge and experience.

The first three-hour evening session was a useful refresher and also covered the more obscure rules and how to deal with different match scenarios.

A full day second session continued with more match scenarios and also drills on the pitch, including referee hand signals, use of the whistle, how to correctly do the famous ‘coin toss’, assistant referee flag signals and how to 'crab' run whilst looking at play. (This apparently was more difficult than you think at a fast pace).

On the final day Shane and Seb had to put into practice all that they had learnt and referee a couple of short games, and also ‘run the line’ as an assistant, whilst being assessed. They both found this harder than expected and were surprised at the level of concentration required.

Shane and Seb said they both enjoyed the course and are looking forward to sharing their new knowledge with the rest of the LD squad; they certainly now have more respect for this challenging role! Well done to them both. 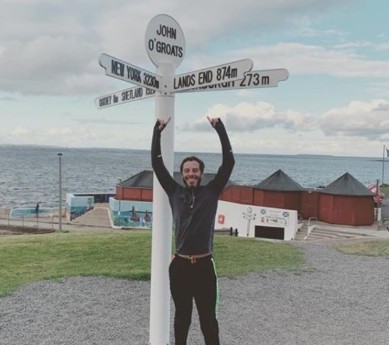 Despite having to deal with extreme weather conditions, Ciaran Hocking completed his remarkable Land’s End to John O’Groats cycle challenge, covering an extraordinary total of 874 miles, and raising over £1300 for the coffers of LD football.

Originally intending to start back in April, Ciaran had to patiently wait until the easing of the Covid-19 pandemic restrictions, and eventually set off on his epic jpourney on August 18th.  He initially followed the famous ‘Trafalgar Way’ route before heading north just after Exeter, travelling through Somerset and Gloucestershire. 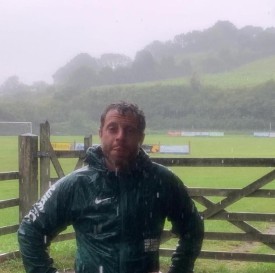 A soaked and storm-swept Ciaran!

Despite being fit, Ciaran found parts of the route difficult with very steep inclines and of course he has also had to cycle through extremely difficult conditions and along many flooded roads because of severe weather brought in by storm Ellen, which battered parts of Scotland.

“The last few days in Scotland were mentally tough,” said Ciaran, “but the scenery was fantastic!”

What an outstanding effort, and what a fabulous feel-good story after what has been, and sadly continues to be, a very difficult year for Disability Sport in Jersey. 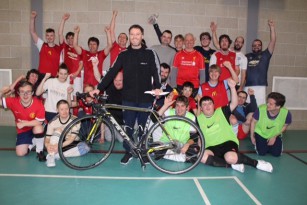 Ciaran had planned to cycle from John O’Groats to Land’s End in April but with the current pandemic this was cancelled and he is hoping now to undertake the challenge in August.

With the support of some of his work colleagues and friends he has still managed to raise the incredible sum of £851 and, being a keen footballer himself, has kindly donated this to the LD football team. 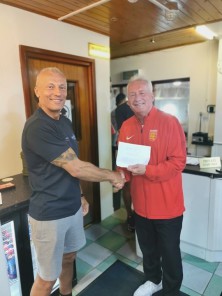 Zoltan is a personal trainer at The Mayfair Hotel and with the support of the hotel entered the Elite Muay Thai V1 competition, planned for March 2020, but unfortunately this too got cancelled.

Knowing quite a few of the football squad players, Zoltan decided to use the build up to the event to promote a raffle, which included prizes donated by himself and the hotel. In all, he raised the magnificent sum of £665.

Coaching success for Shane and Seb 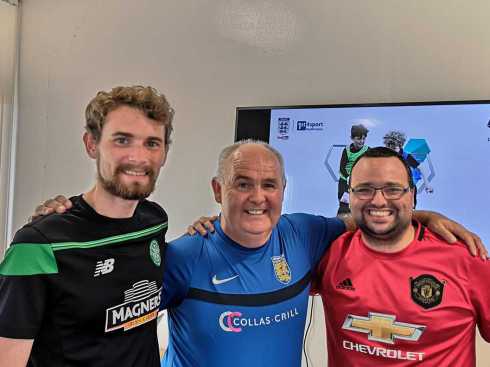 Shane Crocker and Seb Leonard have both passed the Level 1 certificate in football coaching, provided the the J.F.A. at Springfield Stadium.

The two long-standing players of the LD football squad both thoroughly enjoyed the challenging course, as it gave them an insight into another side of football and covered a variety of other subjects such as club administration, emergency aid, child protection and best practice.

Shane joined the football squad as a young man fourteen years ago and has become a very respected player, captaining the first-team in all competitions both in Jersey and in the U.K. In 2013, he led the Jersey team, representing the Southern Regions, to a gold medal in the U.K. Special Olympics in Bath.

Shane was nervous starting the course, but characteristically he was determined to do his best. "I really enjoyed the practicals," he said, "because they show us how to plan drills and put them into action which will definitely help the squad at training sessions."

Seb Leonard is an ardent Celtic supporter, and has been playing with the Jersey squad for eight years - he marshals the first-team's midfield where his work rate is boundless.

Ever-passionate Seb has wanted to get into coaching for some time and says: "I hope to develop even more from the course in future and become a top coach in years to come, teaching players young and old about the beautiful game."

Both footballers thought the course was brilliantly run by Brian, Dan and Paul and would like to thank the guys for their time and effort.

Silver for Jersey A squad in Yorkshire scorcher! 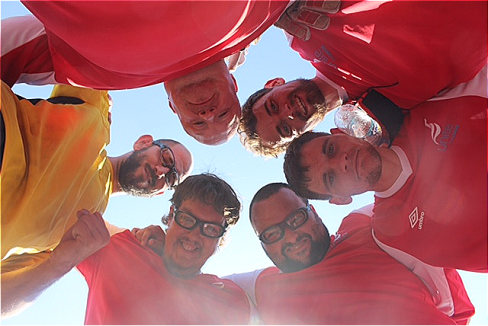 Jersey A squad just missed out on Gold

Eighteen players of the Jersey Learning Disability squad took part, for the first time, in a five-a-side tournament in Doncaster, using the training facilities of Doncaster Rovers at the Keepmoat stadium. Over forty teams took part, many of which Jersey had not come across before, and the heat wave over South Yorkshire saw temperatures hit 33C, which added to the challenge for the Jersey teams.

Jersey fielded three teams of six players and in the morning they each played two assessment games of twelve minutes each, the results of which saw the three teams being promoted to higher leagues for the afternoon’s competition.

After winning the first four matches, Jersey A went into the final game, against a strong Wrexham team, who had lost one game very narrowly, dead on their feet in the draining heat.

After both teams had come close to scoring, Wrexham broke the deadlock and shortly afterwards scored a second goal from a set piece. Seb Leonard pulled one back for Jersey and as they pressed forward in the last few minutes to try and snatch a draw, Wrexham scored a third.

With Jersey and Wrexham on the same points tally, it was Wrexham’s better goal difference that saw them take top position and Jersey had to settle for well-deserved silver medals. Malcolm Motie, who played every minute of each game, received the A team‘s best player award for his ‘solid as a rock’ defending.

Jersey B were placed in a very strong league and, despite narrowly losing three games and drawing one, every player gave their all, enjoyed the matches and felt that they had learnt much from the competitive games. The B team coach, Alex Reid, awarded the best B player award to Alex Hilton for his leadership, positivity and work rate.

In the two grading games, Jersey C scored ten without reply, with Ryan Jones and Simon Routier both scoring four and Olly Wellum a brace. These performances saw them promoted two leagues which may have been one too many as they lost their three afternoon league games.

Despite the results, there were some outstanding performances from George Schiessl, making his debut trip, and Olly Wellum who scored a hat trick in the final game. However, the best C team player was awarded to Warwick Millar for his overall contribution.

The Jersey squad gace their heartfealt thanks to the Jersey Football Association and Unite for their support, which meant that the teams not only looked the part in their new kits, but also helped improve their football through the use of Springfield Stadium. 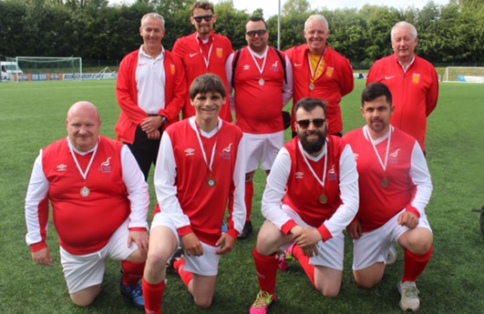 The very well-run Wrexham Inclusion FC tournament was played on the 4G surface at the New Saints football club, home of the Welsh premier league champions. The 24 teams taking part were divided into three leagues of eight teams in each and Jersey was placed in league 1, the second ability level. The top four went through to the knock out stage.

All of the seven games were competitive and the Jersey players defended well, closed the opposing team down and took their goal scoring opportunities. This resulted with Jersey topping their league having won five and drawn two games, scoring twelve goals and conceding only one.

In the knock out round, Jersey were drawn against Wrexham B.  A few nerves showed at the beginning of the game but Jersey soon gained their composure and took control of the game. Despite having the majority of possession, Jersey were unable to take their few opportunities against a very defensive Wrexham team and the game ended goalless. A best of three penalty shoot-out followed and unfortunately Jersey were beaten 2 - 1.

The hosts went out of their way to make Jersey feel welcome and some of their club members and coaches organized an enjoyable fun day of football golf the day before the tournament. With their knowledge of the course, the Wrexham players had the lowest score cards but the Jersey players didn’t disgrace themselves after the two rounds of 9 holes, which is more than can be said of their coaches!

The squad would like to thank the Jersey Football Association, Sir James Knott Trust and Unite for their support. 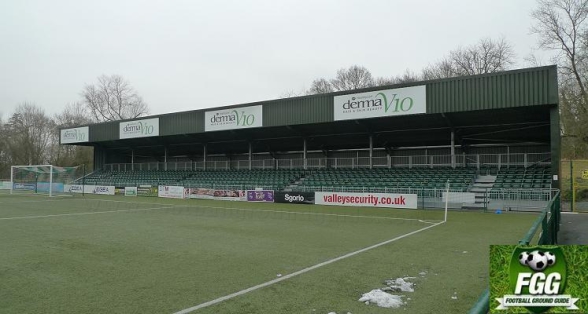