The boy done it! Well done and congatulations to Alex Hilton, who becomes the first person to successfully cycle around Alderney, Herm, Sark, Guernsey and Jersey in one day.

What an extraordinary achievement. Over 90 miles in just 24 hours. No wonder Alex was still buzzing a day after he had completed the challenge.

"One day after the greatest day of my life, and I would like to thank you all for your support," he said. "It's safe to say I'm still tired and my legs are still feeling heavy, but it was worth it."

So what now for Alex after this historic cycle challenge? "I am now gonna have a small break from cycling and get back on the saddle soon."

Will this CI Cycle Challenge become a regular event, maybe one in which others can have a go? Alex says he will do all he can to make it happen. "I will just need to sit down and work out how!"

And the ever better news is that Alex has already raised nearly £6,000 to be shared between his two chosen charities, the JSAD and Wetwheels. That's over 300 per cent more than his original target of £2,500!

You can contribute by clicking here.

Scroll down to find out more about Alex and the CI Cycle Challenge. 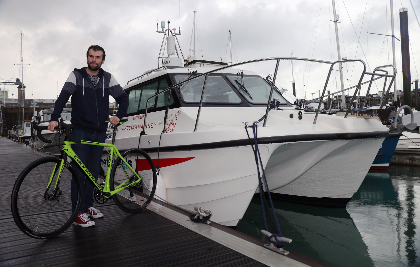 Alex Hilton alongside the boat "Wetwheels"

Fundraising is something in which the JSAD excel – it has to, just to exist, let alone do all the wonderful things that have made it THE disability sports group in Britain.

So when somebody comes along and says they will donate funds, you have to sit up and take notice, especially when the fundraiser is one of your own!

Alex Hilton was born in Jersey 23 year ago and has Aspergers Syndrome. Mind you, this does not prevent him from excelling at Philean Trust Company, where he works as a Work Support Assistant.

Having lost over three stones last year, personal fitness is now a big motivation for Alex and last Christmas he decided that he wanted to do a charity event in 2016, one which would be a big personal challenge and also hugely motivational to his peers.

He liked the idea of a cycling event, and that idea has grown from simply cycling around Jersey, to an 90-mile circumnavigation of the Channel Islands in just 24 hours.

In order to make the idea become a reality, Alex sought assistance from Wetwheels Jersey, a local charity who provide trips to sea for hundreds of disabled and disadvantaged islanders and visitors each year.

He will donate all funds raised equally between Wetwheels and the JSAD and will also help to raise awareness of Aspergers Syndrome.

So who is Alex Hilton?

Alex became involved with the JSAD a number of years ago when he was asked to join the association’s football team and has never looked back. Inspired by what he saw at the annual JSAD awards dinner, he really wanted to give something back to the charity that makes a huge difference to his life.

So why this challenge?

“I had heard of Wetwheels from a friend,” he said, “and how they offer days out for islanders with disabilities the chance to go out to sea for a day and see the island and further afield.

He added: “I thought it was such a great cause I wanted to give something back to them”

What about the back up that was needed?

Support and assistance for the Challenge grew rapidly. Free spinning classes and personal training was given by Tim Rodgers of BodyRox, with Big Maggy’s Cycle Centre providing the bikes and on-road training Alex needed in order to maximise his chances of achieving his dream. He was accompanied around the course by Peter Langdon and Richard Tanguy, both experienced road racers.

Logistically, Wetwheels was the ideal boat to help Alex achieve his ambitious challenge. Fast, stable and with ample open deck space to transport his bikes and support team, she was the command centre from start to finish. Alex was accompanied by a support team comprising two support riders, a physiotherapist and a medical assistant. He was also be accompanied by his mum, Deputy Jackie Hilton.