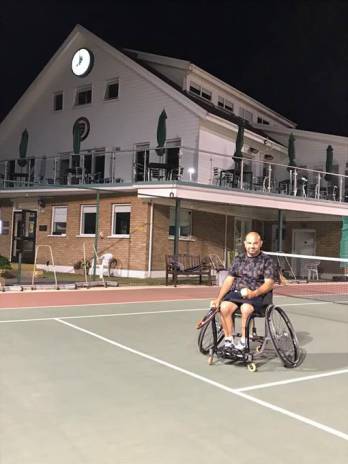 James Brady on court at the Caesarean

At a time when there is still so much frustrating and negative news surrounding the Covid-19 pandemic, some really good news from

This sport has been able to restart after lockdown, and it has proved very successful. Now the nights are getting longer, play is possible under the brilliant floodlights at the Caesarean Tennis Club.

Let's hope for some more positive news in the near future - we all need it! 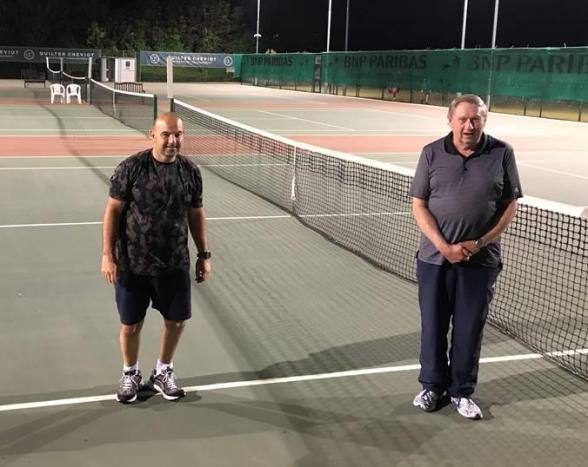 3rd place for James in Shrewsbury 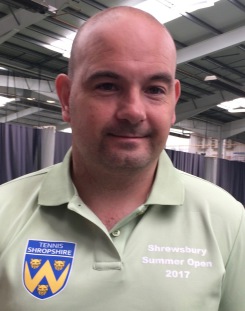 There were some unfamiliar faces in the draw and in the 1st round, Brady was drawn against Gary Cox from Bedford, a player who he hadn’t met before.

The early games in a tournament are always difficult while the players get used to the courts and Cox started the stronger, breaking James’ serve in the first game.

The first set then settled into a tight contest in which James struggled to find his best form but gradually worked out his opponents weak spots by moving him around the court. Without totally dominating, James eventually took the first set and then rattled off the second, and the match, with some better play. 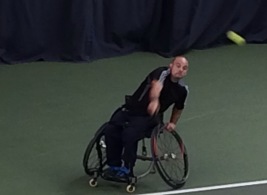 James in action at Shrewsbury

Many players on the UK circuit have suffered at the hands of Brady’s deceptive style, where he manages to frustrate his opponent by staying in rallies (and matches) when he is on the defensive before fizzing down a heavily-sliced backhand (known affectionately as the ‘Jersey cheese slicer’) that leaves them reaching for air.

It was noticeable that ten games went by in his first match before James got this working, so he needed to start his next match with more urgency.

Instead, his next opponent Matt Murray, a young and very talented rookie player, was the one who looked in a hurry. Murray took the first two games fairly quickly and looked comfortable before James ‘switched on’ and then effectively broke Murray’s resistance by only losing one further game in the entire match, strolling to a second straight sets victory and a place in the semi-finals.

The second day of the championships brought the semi-finals and an altogether different prospect for Brady. His semi-final opponent, Mark Fowler, clearly carried the greater experience and was ruthless in his treatment of any shots that were less than perfect. After quickly losing the first set, James fought back gamely in the second, but it wasn’t enough to stop Fowler going through to the final and leaving James fighting for third place on the final day.

After the disappointment of his semi-final Brady rebounded well and, despite the greater experience of his opponent (Val Fisher form Shrewsbury), he finished the tournament in great shape. After another slowish start, James won a tight and tense first set before finding his rhythm and taking the second set and the match. His determination to compete right to the end was best demonstrated by the fact that only one game in the second set did not go to deuce, yet James dug in and won every single one of them.

The Shrewsbury event is a very popular one in the calendar and attracts a high number of entrants from all over the country. This guarantees a highly competitive programme and the championship was the perfect opportunity for the Jersey player to test his game against a range of UK talent.

And it was a very solid return from the tournament for James, so congratulations! 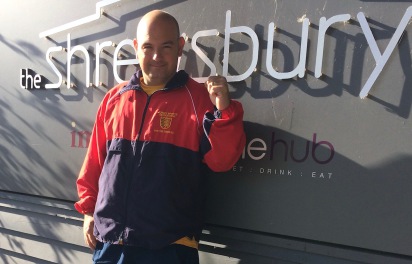 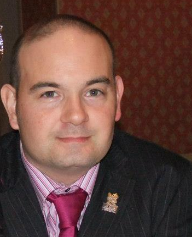 Jersey’s James Brady battled really well against big opposition in his first international wheelchair tennis event. He won one and lost two matches, one very narrowly, at the Graves Tennis & Leisure Centre in Sheffield, in June 2016.

The ITF Futures Tournament is part of the UNIQLO Wheelchair Tennis Tour and featured an international line up of high quality, including many players ranked in the world top one hundred.

The huge challenge facing James was immediately apparent as he was was drawn against the eighth seed, Grego Shea, a previous UK title winner.

Shea started very strongly taking the opening set 6-2, and looking confident that he could win the match quickly.

It’s possible that James’ lack of tournament opportunities in Jersey contributed to his rusty start but in the first game of the second set he flew into action taking an early advantage which he maintained throughout, taking the set to a tiebreak. Of course, losing the tiebreak would have lost James the match but he was starting to enjoy himself and a 7-1 tiebreak win levelled the match at 1-1.

At this stage a huge upset looked possible as Brady raced to a 3-0 lead in the third set, and as Shea commented later: “He was picking me off and I had to take myself away mentally and rely on my experience of being in that position before”.

There is a necessary balance between all the attributes needed to win and Shea proved this by working his way back to parity before finally winning out 6-4 in the final set.

As if to prove that the bar had well and truly been raised for James in this tournament, he also faced the fifth seed, Gareth Greene from Ireland, who won soundly in straight sets. Again James was not outclassed in his court play, but tennis matches are so often won by the player who has the experience to win the big points and Greene virtually cleaned up in this area.

James came home though with a win, after a dominant display against Nathanial Lowe-Cordingly from the UK, winning in straight sets. He also participated in the Doubles tournament with Craig Nicholson from Wales.

JSAD wheelchair tennis head coach Guy Gilson put James’s performances into perspective. “Given that there are no other wheelchair tennis players in Jersey and thus his very limited tournament opportunities, the only way for James to develop further is to continually test himself against the best in events such as this. For this reason, the experience was vital and his performances represented sound progress.” 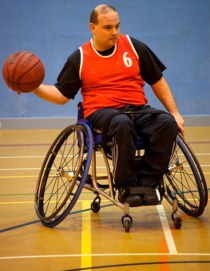 In the 2014 National Wheelchair Tennis Development Series Finals in Gloucester, James Brady was knocked out in a very close quarter-final.

Earlier, in the only 1st round match that went to a deciding set, James beat doubles partner Shahzad Afzal from Lancashire 5-7, 6-1, 6-4. His quarter-final opponent, 3rd seed Steve Crompton, also came through a tough opening match to beat Paul Furber 7-5, 6-4.

But Crompton proved slightly too much for James in the toughest of the quarter-finals, and reached the semis courtesy of a narrow 6-4, 7-5 win.

So in the same month as picking up the top JSAD annual award, James had reached the Wheelchair Tennis National Finals by gaining sufficient points from competing in the National Development Series around the UK in 2014 to gain a top-16 place to qualify.

Watching all the matches with interest were the 2016 Rio British Paralympic wheelchair tennis selectors.

So no pressure then, James!!