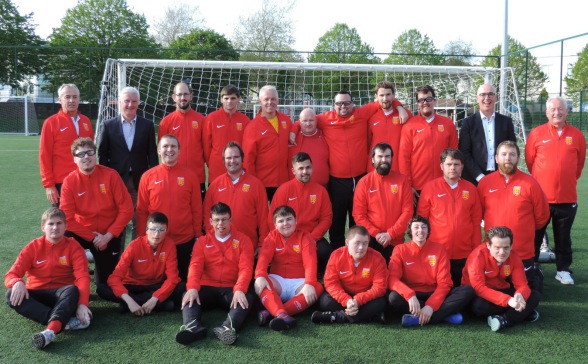 Seven players from the Jersey LD football squad have been training at Springfield Stadium for a tournament in Wrexham at the start of June. 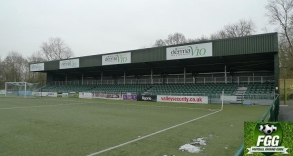 The tournament is hosted by the Wrexham Inclusion Football Club and will be played at the New Saints football club, home of the Welsh premier league champions, on a 4G surface.

Twenty four teams will be taking part, with three leagues of eight teams in each. A round-robin format will be played to start and the top four teams will play in their own knock-out games for a Championship Cup, with those teams positioned fifth to eighth doing the same for a Community Cup.

The games will be 12 minutes each, and with a minimum of eight games, the squad will certainly be playing a lot of football!

The Jersey Football Association have also generously donated new tracksuits for the whole squad and the players are delighted and proud to be able to represent the Island wearing the Jersey Red.

Big thumbs up for Guernsey visit

After a sabbatical of a few years, the Guernsey LD football squad reformed and it was thumbs up from the Jersey players to have the Sarnians visit again for a few friendly games of football.

Before the round robin competition, a couple of short assessment games were played which Guernsey won quite convincingly. Two Jersey teams then played the Guernsey team in matches lasting 12 minutes each, ending in these results:

A decider best-of-five penalty shootout ended with Guernsey winning 3 - 1 against the Jersey Beans.

Everyone was pleased to have the chance of renewing the relationship and the two squads then enjoyed a basket meal and mixed game of bowls at which all of the players received participation medals.

As the ability of the Jersey Learning Disability squad develops, and both training and games become more intense, health and safety has become an increasingly important factor for the JSAD.

Although not a full contact sport, there are still instances when players come into contact with one another, and the impact of a ball during play also has to be considered.

Since they are unable to wear contact lenses, many of the squad wear their day to day glasses during training and competitions and there has been a worry about impact protection from these which could cause damage to the eyes, upper bridge of the nose, ears or cheek bone.

With the support of the charity Eyecan and Harry Foster opticians, our players now have specialist sports protective glasses which not only safeguard against possible accidents, but will also improve their confidence and ability to fully engage in a game without fear.

The coaches and squad are extremely grateful for this support from Eyecan and Harry Foster, and we are hopeful for an improvement in their competition and games as a result of this generosity!

Played on grass at the Billy Neill Centre of Excellence, nearly sixty teams from Ireland and the UK took part, some representing league clubs.

The Jersey teams had mixed results, having had to adapt to the different conditions and larger pitches than those on which they train.

All the results below, and a photo gallery showing some of the highlights of this 2-day tournament.

The Jersey A's first game was against a strong Sutton United team and although Jersey did create a couple of scoring opportunities, they spent most of the game defended their goal and the more experienced opposition won comfortably.

The Jersey team lifted themselves for the second game against Solihull, despite conceding the first goal. They fought back and playing some good football, deservedly won the game.

The third game against Grove saw both Seb Leonard and Jordan Gautier scoring quality goals in the first half. Grove’s large squad allowed them to make a number of substitutions and their different team applied constant pressure. Despite stout defending and some excellent saves by Scott Graham in the Jersey goal, Grove score twice and the game ended in a draw. The final game was against Skem-men, the eventual winners of the band level, and a tired Jersey team were well beaten.

The ability 4 group leagues saw Jersey B and C teams placed in different leagues, each having to play six games of eight minutes each. Jersey B played consistently well in all their games with each player playing their part and they went undefeated and did not concede a goal.

With Jersey B topping their group, they when through to the semi-final knock out game, against Wrexham B. After an exciting start to the game which saw both sides hitting the frame work Wrexham broke the deadlock but just before half time a precise pass from Malcolm Motie enabled Ryan Le Monnier to beat the opposition’s defense and slot in the equalizer.

The second half was end to end but Jersey missed their chances of scoring and Wrexham scored twice to put Jersey out of the competition. Wrexham went on to win the ability level final and because Jersey had won their group, they were awarded third position.

With one of the Jersey C players unfortunately badly spraining his ankle, the remaining five players had to battle through all of the games and struggled against some very able and physical teams. Unfortunately they did not win any games but the majority were close matches and the highlight was a move involving all the players that resulted in Ryan Jones finding the back of the oppositions net against Coleraine.

All the coaches were very pleased with the performance of their players and it was difficult to choose the best player awards for each team, but David Collingwood, Charlie Quenault (both making their debuts with the squad) and Chris Green of the A, B and C teams respectively were selected for their overall contribution and effort across the two days. James Lang was also presented with an award for sportsmanship.

The Jersey teams would like to thank the Sir James Knott Trust for their continued financial support, which is essential if they are going to have the opportunity to travel and play against other teams.

The squad trains every Tuesday evening at Les Ormes between 5.45 and 7.15 and anyone interested in taking part should contact Gary Norman on 879033.