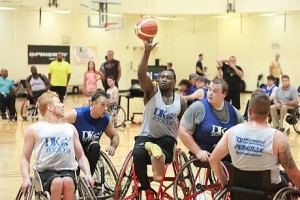 In exciting news that's just come in, it's been revealed that the 2022 Commonwealth Games in Birmingham will feature, for the first time, 3x3 Wheelchair Basketball.

This is played in half a basketball court with one offensive and one defensive team of three a side. The objective is to score an agreed amount of points or to be the highest scorers within a 10 minute period – the maximum length of a standard game. You can find out more here. Believe it or not, 3x3 basketball is considered to be the number one urban team sport in the world.

As this is all new (the international IWBF rules were only ratified in April this year!), the JSAD hosted a succesful 3x3 trial session on 22nd July at Les Quennevais.

Fifteen people attended to try their hand, making up five teams who took part in a mini round-robin tournament. The concensus was that, with a few small tweaks that made the games flow better, a proper competition in October would be an excellent thing to organise.

So it's hoped that six teams could take part for a one night competition - watch this space! The date has just been confirmed as Monday 7th October.

You never know, maybe we’ll be in a position to field a team at the Commonwealth Games 2022 or beyond!