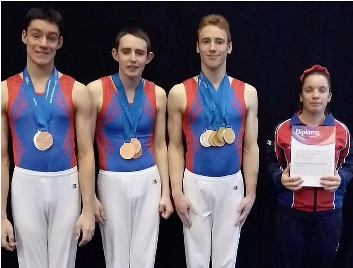 At Liverpool's Echo Arena, Alex had an outstanding Floor routine gaining Gold with a score of 12.30, and was very strong on Rings.

James Lang also had a great competition and won three silver medals, coming fourth on Floor and Parallel Bars, and sixth on Rings

All our gymnasts were in great company as they competed alongside all the British mainstream gymnasts, all trying their best to get onto the British Squad for the Olympic Games in Rio later this year.

Thirty members of Jersey Special Gymnastics Club enjoyed competing in their Team Christmas Competition at Greenfields, judged by four officials from the UK.

There were some outstanding routines but all of the gymnasts have made visible improvement over the year, and this was reflected by many of their scores.

The club's annual awards are presented at this competition and the winners this year are:- 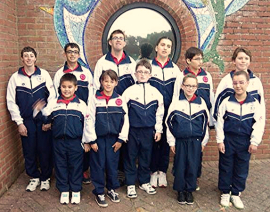 Jersey Special Gymnastics Club secured twenty medals, nine of them gold, at the Poole Open at the Rossmore Leisure Centre. This is a three-piece competition for disability recreational gymnasts.

All eleven Jersey gymnasts did extremely well in their various age groups and levels.

In Level 1 U16's, Ella Davidson, Alexandra Wheatley and Louise De Freitas were all competing against each other, and the three girls took all the medals available in this group. Alex won gold on Floor and Vault, Ella took gold on Beam, while Louise won silver on Floor.

Anais Martin-Cellier competed at Level 1 U12's and had some strong competition with ten gymnasts in her group, so she did well to come away with bronze on Vault, and fifth place on Beam and Floor.

For three of the gymnasts, Liam Timothy, Talia Racjan and Jayden Hender, it was their first competition in the UK and again, all three did well. Liam came home with a silver on Vault and a bronze on Floor, while Talia managed to get two bronze medals. Jayden was in a very large group of 13 gymnasts and on this occasion did not manage to place for a medal, but did get 5th place on Vault. 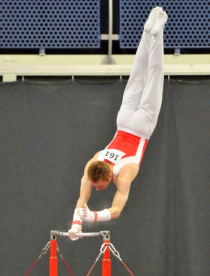 Alex in action in Bolton

At the USN Bolton Arena, Alex Buesnel dominated the 2015 Senior Men's British Disability Open Championships for the eighth year in succession, coming home having won all six gold medals on the apparatus, and the overall gold.

After  this outstanding performance, JSAD head honcho Paul Petterson exclaimed: "He is a world class performer - of that I have no doubt at all."

James Lang won 2 Bronze medals in the Senior men's open competition, and team mate Aaron Bonnar took  bronze on Rings. Both had a new skill set for these championships and surely have a bright future in the years ahead.

Matthew Kirkland just pipped Ryan Blandin for overall gold in the Junior Open Competition. They each won three gold and three silver apparatus medals in an extremely close competition, with Matthew just coming out on top with 58.765 to Ryan's 58.666. Yes, it was that close!

Rui Reis had an outstanding competition. At 39 years old, he managed to take the Overall Gold in the Men's Senior Competition B. He was competing against gymnasts much younger than himself but managed to win gold on 4 pieces of apparatus and a silver on rings.

James Lang and Eloise Clyde-Smith gave outstanding performances at the Special Olympics World Games in Los Angeles, with both returning to Jersey as World Champions!

Together with their coach Yana Vibert, the trio were part of the 170 strong Great Britain Team.

James and Eloise competed in Artistic Gymnastics, and both gymnasts exceeded all expectations.

James had a fantastic competition getting into the top division for every piece with a set of fantastic scores. He has returned as Level 3 World Champion winning 6 gold and 1 silver medal.

Eloise was in a very large group with 36 girls competing at her level, but she managed to remain focused throughout and qualified in the top groups. She has come back as Level 1 World Champion for Uneven Bars, second on Beam and fourth overall, with a sixth place on Floor and seventh on Vault.

Coach Yana was thrilled with these performances. “These two gymnasts both excelled,” she said. “They are wonderful ambassadors for their Island. It was a delight to be able to share in their achievements and I am so proud of them both.”

These games, held every four years, is for sportsmen and women that have an intellectual disability and was the biggest sporting event to be held in the world this year. There were 6,500 athletes, 2,000 coaches representing 165 countries in 26 sports with 30,000 volunteers and over 50,000 spectators.

When the squad arrived in Los Angeles,  they went to their Host Town of Calabasas, where all the British athletes stayed at the "Gillette Ranch". They had a few days of training and were treated to some cultural events within the city and had a fantastic welcome by all of the locals.

On the 25th July everyone that was participating attended the Opening Ceremony in the Los Angeles Memorial Coliseum, to be greeted by a crowd of over 60,000 spectators! Performing were Stevie Wonder and Avril Lavigne and The Games were opened by Michelle Obama.

Once in Los Angeles the gymnasts were based within the fantastic UCLA Campus and the competition was held within the John Wooden Centre. The venue provided them with a brilliant warm up gym and a venue that was packed full with over 3,000 spectators every day, creating an amazing atmosphere.

The 3 GB coaches were delighted with their team of 9 gymnasts, their total medal tally ended with 22 golds, 13 silvers and 11 Bronze. 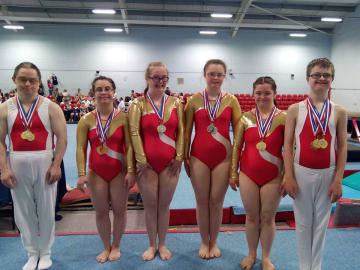 The six successful gymnasts with their array of medals

Competing against gymnasts from all over the UK in the 2015 Downs Syndrome Nationals, all six gained a medal on every piece on which they competed, and with some great scores.

Rui Reis, in Senior level Two, kept his composure throughout the competition and took all 6 gold medals in his group.

Not to be outdone, Thomas Tyrrell, in Junior level One, also won six gold medals, with a high score on Vault of 19.50.

Eloise Clyde-Smith won three golds and a silver at Senior level One, which will hold her in good stead when she travels to the L.A. World Games in July. This competition proved that she is ready for the challenge.

Rachel Christie and Jessica Vieira competed against each other in Junior Level Two, and they dominated the group taking all first and second places on all pieces. 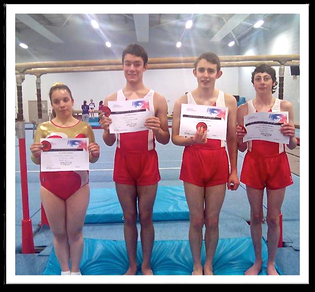 The highlight was Cailiegh Quail, competing at Level 3. Not only did she gain a Merit, she produced an outstanding Bar routine, and recieved the highest score of the day in her Range and Conditioning.

Not to be outdone, her team-mates James Lang, Aaron Bonnar and Ryan Blandin, competing at Level 6, all performed at their best with Distinctions for James and Aaron and a merit for Ryan.

There are 10 levels within the programme, with level 1 being the most difficult. The gymnasts are expected to complete Set Routines on the apparatus and a Range and Conditioning set to obtain a score to gain either a Pass, Merit or Distinction.

Alex Buesnel led the way with six medals, two of them gold, as all four Jersey Special Gymnastics Club members excelled at the British Artistic Championships in Liverpool.

In the disability section, Alex took gold on the rings with a score of 11.550, and he was also well clear of the field on the pommel horse with a total of 10.700.

He also picked up silvers in four other disciplines, the floor, high bar, parallel bars and vault. 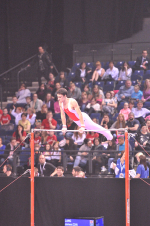 James Lang won bronzes at both the vault and high bar, while his team mate Cailiegh Quail did likewise in the women’s uneven bars.

And while Aaron Bonnar missed out on a medal, he performed really well on the three disciplines in which he competed.

Head coach Yana Vibert was full of praise for all four gymnasts. “This was a fantastic experience allowing the Best British Disability gymnasts compete alongside their mainstream counterparts,” she said. “Our gymnasts did their Club, their coaches and their families proud.”

She also put the Jersey performances into context. “Jersey has four disability gymnasts in the top 12 in Great Britain. This is a great achievement for such a small Island that does not have a purpose built training facility like their UK team mates.”

All the competitions took place at the Echo Arena in Liverpool.